OWEN THOMPSON (Director) is an award-winning director whose productions have been seen in New York City and across the country. He is also the producer of newTACTics, the annual festival of original plays presented by TACT (The Actors Company Theatre), and co-founded New York’s Protean Theatre Company for whom he directed the New York Premiere of The London Cuckolds as well as his own adaptation of Molière’s The Doctor in Spite of Himself. Other NYC directing credits include The Imaginary Invalid and Bad Fiction for TACT, Tennessee Williams’ A Lovely Sunday for Crève Coeur for the Triangle Theatre Company, several shows for The Abingdon Theatre Company, and James McLure’s Thanksgiving at the American Theatre of Actors. Regionally, Owen has directed How I Learned to Drive at Queens Theatre in the Park, The Mystery of Irma Vep at Seven Angels Theatre, Lettice and Lovage starring Katharine Houghton, Romeo & Juliet at the North Carolina Civic Center, and A Flea in Her Ear at the Ivoryton Playhouse. As Producing Director of the River Rep Theatre Company, he directed The Good Doctor, Bell, Book, and Candle, and The Mikado, for which he received the Connecticut Critics Circle Award for Outstanding Director of a Musical. Owen is also an educator and has taught at Fordham University, CUNY’s City Tech, and Marymount Manhattan College, and holds post-graduate degrees in classic dramatic literature from Fordham and Hunter College. www.owenthompsondirector.com

CANDICE DiLAVORE (Stage Manager) has been stage managing on and off since she was in high school. She has worked on productions with The Gateway Playhouse, WHBPAC, and HITfest, and stage managed the original production of The Apron Strings Project at the Vail-Leavitt. She is forever indebted to Joe Minutillo for telling her what a stage manager is. When she’s not immersed in the arts, she can be found reading policy papers about free market economics.

VIVIANE GALLOWAY (Costume Design)  holds a B.A. in Theater Arts from the University of Richmond and an M.F.A. in Theater Design at Brooklyn College. Her work includes “Pygmalion” and “Mother Courage” (Jean Cocteau Rep.); “A View from the Bridge” (The Secret Theater); “True West” (White Horse Productions); “Mrs. California”, “Dear Ruth”, “The Baltimore Waltz” and “The Butter and Egg Man” (Retro Productions); “The Tempest”, “Happy End”, “The Cradle Will Rock”, “Candide” and “A Little Night Music” (Theater 2020). Viviane also frequently designs one-acts at The 52nd St. Project, a program that works with kids to create original productions. Viviane has been nominated for the New York Innovative Theatre Awards for Outstanding Costume Design for “The Desk Set” (Retro Productions, 2010) and “A Midsummer Night’s Dream” (Theater 2020, 2013). costumegal.nyc

RICHARD FROHLICH (Sound Design) A three time Column award winner, has designed sound for more than 70 productions at over a dozen Dallas, Fort Worth area theaters since 2005 as well as for two Off-Broadway productions. In 2001 he founded the award-winning Texas Radio Theatre Company. In addition to sound design, Richard is a video producer, graphic and animation designer specializing in e-learning, vocational and training programs. B.A., Western Connecticut State University. He makes his home in Arlington, Texas with his wife Shannan and their three children.

ANDREA ALTON (Press Representative) founded Alton PR in 2011 with the aim of providing reasonably priced press services to new plays and festivals. Previous clients include: The Butter and Egg Man (Retro Productions), yeah, i met this girl (Elsinore County), The Sister Rosettas (terraNOVA Collective) as well as numerous FringeNYC productions including Urban Momfare (Encore Series), and The Unfortunates (Encore Series). In addition to PR work, Andrea is also an actor and playwright. Last fall she won The Doric Wilson Independent Playwright Award at The New York Innovative Theatre Awards. In addition, the two person comedy, A Microwaved Burrito Filled With E. coli, which she co-wrote with Allen Warnock will premiere at FringeNYC in August. www.altonprandproduction.com

THE LUNTS ON THE ROAD! 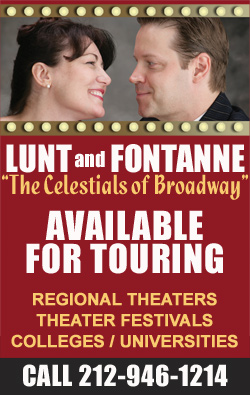